According to the TIPS4Math scope and sequence maps found at edugains, it was only going to take me 5 days to teach money.  I had 5 days before March Break, so it seemed a perfect match.  I mean, I thought it would take more than 5 days, but I had 5 days and wanted to believe that if I had enough faith I could finish all of the math stuff in those 5 days.

Then on Monday I found out we didn’t have to be at school on Friday.  (I pay really close attention to calendars, obviously.)  But that didn’t matter, because I had technically started doing some things with money the week before, so I was going to be OK.

Let me stop right here and say that if all I wanted to do was check the curriculum expectations off my list, then I would have been “finished” with all of the money stuff after 5 days.  I seriously would have.  But, I don’t know.  Money just seems like one of those things kids should not just do.  They need to understand money, even when they are 8 or 9, right?

Here’s what we did:

If you haven’t ever seen The Pancake Menu, take a look here. Such a fun book and activity! We read that and talked about it, but I didn’t want to make pancakes again, so I told my grade 3’s to come up with their own cafe idea.  Then we ran out of time, so on Wednesday night after school I bought a bunch of stuff for ice cream sundae’s, plus root beer and dragged it all to school on Thursday.  I gave the grade 3s a blank menu and they figured out prices.  I told them each grade 2 would have $1, so they had to keep the prices low.  They did pretty well with this, double checking the addition with different combinations of toppings for the ice cream. 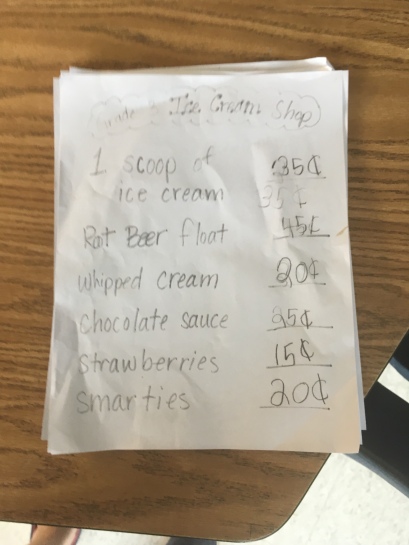 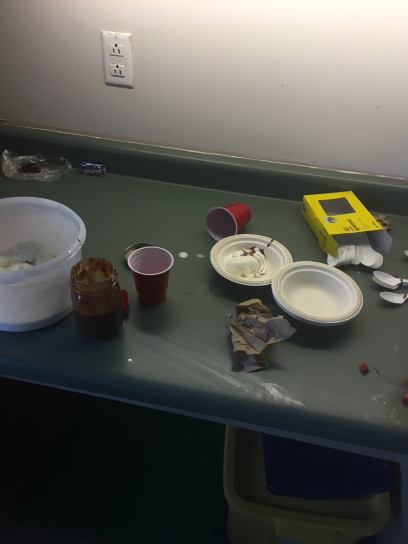 They gave each child a plastic Loonie, which I had to explain was a problem if they didn’t want to make all sorts of change.  So they counted out a dollar in different coin combinations for each of their grade 2 classmates.  Except some of the kids got more than $1 and some got less than $1.  Then the grade 2s came to the table to give their orders and everyone gave up on counting money because there was ICE CREAM within their line of sight and the grade 3s were in a panic that we’d run out before it got to them.  They were just taking all the money and the grade 2s were trying not to climb over tables to get their sundaes and thus did not care about receiving change. I was busy scooping out ice cream and training kids to use the whipped cream in a can (#VitalLifeSkill).  Then when everyone asked for seconds, I said, “Depends on how much money you have left.” and that’s when they realized they’d been ripped off by the ice cream sellers.  The entire class stared silently at me and my half-full bucket of ice cream, unsure if I was actually going to keep the rest for myself.  (I’m not going to lie – it crossed my mind. I had homemade hot fudge!)

Morals of the story:

When we get back from March Break, I am going to have everyone write out their orders for the grade 3 students, and they will figure out the actual totals, and then I will have them count out the right amount of money they would need to pay a cashier.  I will not be giving them more ice cream until at least June. 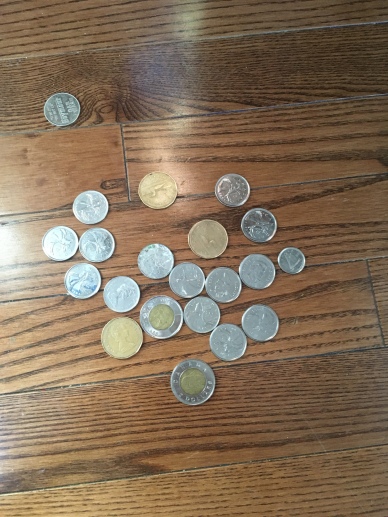 She wanted to buy something that cost $21 and I told her she’d have to use her own allowance because it was something junky.   She names every coin, but she’s not unitizing the money yet, and doesn’t really get that each coin has a different value.  She can count by 5s and 10s, so she can count dimes and nickels if I am next to her walking her through it.  She’ll get there though!