Sometimes I sit back at the end of a week and I can’t remember what even happened! That’s one of the reasons I’m enjoying my weekly reflections this year. It reminds me to sift through the feelings and find something positive. It’s easy to wallow in the discouragement of a busy week. I know I’m not the only educator who ends a week thinking, “That did not go as planned!” Or “I’m basically a failure and I’m wasting everyone’s time! Or “I wonder if it’s too late to trade this all in and buy a taco truck.” I mean, how many bad days can a taco truck operator actually have? I bet a taco truck driver never goes home feeling like a failure!

This week we talked about money. We finished the week being able to identify every Canadian coin and it’s value. We know why we need the cent sign and dollar sign. We even counted money quite successfully. We were not incredibly successful completing some math work sheets but everyone does understand that a horizontal math question and a stacked math question are asking us to figure out the same thing. That’s big learning for some kids. And we sang “Canada in My Pocket” a lot (though less than I would have liked.)

So yeah…clearly I was not a failure as a teacher. Nothing really exciting happened. Nothing made we want to rush home and blog. I don’t have any photos of our week. But we still had a successful week. Not a very exciting week, but, yeah, successful.

I’m thinking, however, that if I’m kind of bored with math (I didn’t even title my reflection last week!) then chances are other people are bored with it too.  This week we are moving on to some 2D and 3D geometry.  Or we might move on to area.  In the math long-range plan I am following shapes are up next, but I’m at a different place than I though I’d be at this point, so I might do area first.  Geometry fits nicely with the holidays because there are a lot of crafty projects we can do with our shapes.  Every day between December 1 and the last day before Winter Break gets harder and harder, and crafty math helps us get through. Plus we can talk about snowflakes a lot, and there is a lot of geometry in snow flakes.

Sounds like I’ve talked myself into area first.  Maybe we can figure out the area of the perfectly sized tortilla for my taco truck business.

Found this on Twitter the other day, and decided to give it a try.  We are “finished” with some learning about adding and subtracting and unitizing and counting.  We need to move on – both for my sanity and because there are other things that need to be covered in the curriculum.  We will circle back to this in the new year, and we’ll keep practicing when we do a daily Number Talk at the beginning of our day.

I’d decided to move on the geometry, mostly because I’m a sucker for all the Christmas tie-ins.  I love making 3D shapes into ornaments and decorations! But then this fun fraction activity popped into my life, and I thought it would make a nice transition from Number Sense into Geometry.

On day 1, a shortened math period due to irrelevant circumstances, everybody cut out their pieces.  (As an aside, I know that cutting isn’t math, but we have some fine motor issues, and it’s really good to for us to cut as often as possible.  Also, I have a life to live and it’s takes 20 kids 15 minutes to cut these out so I let them!)  I started by holding up the “whole” and one of the fourths, and then asked the recommended question:  What do you see? 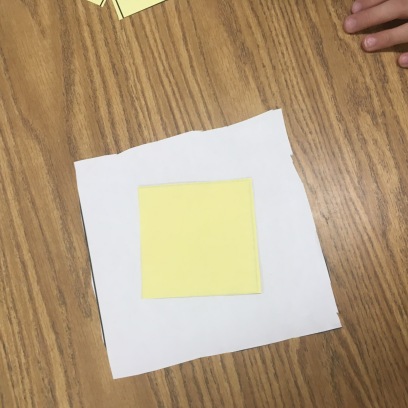 They named a bunch of stuff, unrelated to math:  I see white and yellow, I see a fried egg.  Then they moved on:  I see a small square and a large square; they both have 4 sides, and 4 corners; they are the same but different.  Then I let them go play with their shapes.  We came back and talked about what we saw:  the different shapes in different sizes, teh same shape in different colours, etc.  Then we had lunch.

On the second day, I asked them if they could use the paper to show half.  I was interested in their understanding of half, and also, would they see that you could make half of all the shapes, not just the whole.  While I walked around and talked to different groups, I was so glad that I know that I should ask them to explain their thinking.  Some of them had very unexpected answers that showed partial or complete understanding in a different way than I was originally thinking. 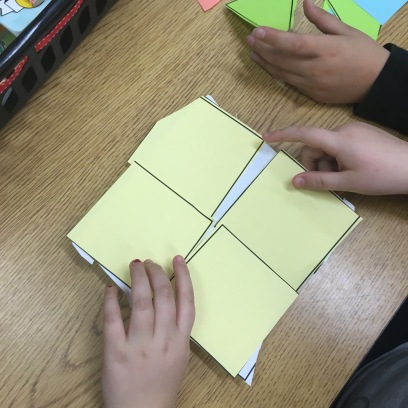 All of these came with justifications for how it shows half. One is half yellow (front) and half white (back), one has purple lines dividing it into sections – half the sections are yellow and half are white, and one uses the purple “lines” to divide a design in half.

We talked about symmetry, which I hadn’t intended to do, but it naturally fit.  I really thought I could do this activity and move on to fourths and thirds.  It was clear we weren’t ready.  Luckily I am SO organized (haha) I was able to grab this book off my shelf:

It’s about a brother and sister who do not want to share fairly, but an unspecified adult (mom?  dad?  babysitter??) tells them to share.  They each get half of the pizza, the dessert, the juice.  Then I sent everyone back to show half again. 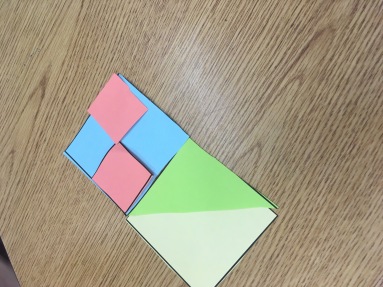 We had better results, and each came with a really good justification.  Then, just to make sure we all understood that each shape could be divided in half, I sent everyone to fold each piece in  half.  Which they did.

My favourite was this one:

He explained that both show half because the one folded twice shows half of half. 🙂 That’s going to get us started on fourths!

On Monday we are going to find other things in the room and in the school that show half, and then we’ll move on to fourths.

Yes, I am in fact still teaching math.  We only have 4 more school days, and 2 of those are booked solid.  This might be my last real math class of the year, but there’s still hope for Thursday!

One day last week, I saw this on Twitter:

I really wish I had not just saved the photo and could tell you where I found it.  But honestly, it was probably around 10:00 at night and I’m surprised I even remember I copied the picture.  I appear not to have retweeted it because I have really searched and can’t find the original source.  If you know who it is, please tell me!

Today I had a long math class (a full 90 minutes, which happens once a week. We don’t always use the whole time, but I am always glad for the extra!) so I pulled this picture up on the Apple TV.

We talked about what we saw.  Then I asked, “How can this child say that 3 hexagons is equal to 11 other shapes?”  I was met with blank stares, which is exactly as I had hoped it would be.  I sent them back to their tables with pattern blocks to see if they could figure out what this random stranger was talking about, and if s/he was actually right.

They played around for a few minutes, and then one child showed me this: 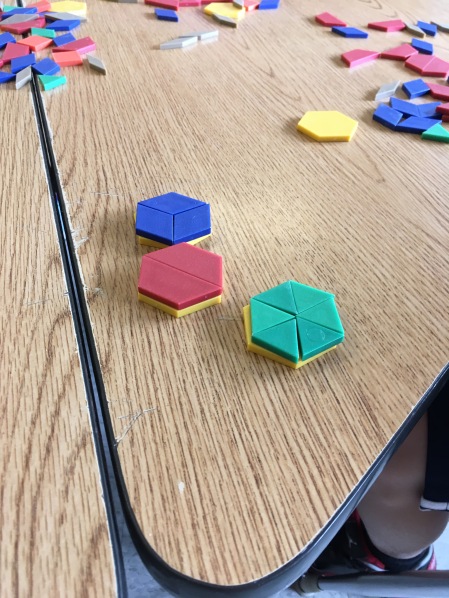 I asked him to explain.  “Well, I saw that 2 of the red were the same as the yellow, so I just tried out the others and it worked.”  Good old “Guess & Check”.  As soon as he explained, other people at his table gave it a try.  In the meantime, on the other side of the room, another child had discovered the same thing.  When I talked to him, he added, “And now (X) is copying me!”  The child next to him had made the same representation.  “It might seem like copying, but I think X was just learning from you.  And look what (X) is doing now.”  I asked her to explain, “Well, I wondered if we could make more hexagons with other shapes, not just the red, triangles and the blues.”  That inspired the other children in her group to start exploring more options.  Could anything be done with the square, for example.

We all gathered on the carpet and I put up a few examples of the student’s work.  “Now,” I told them, “I’d like to see if you can come up with balanced equations of your own.  Maybe you’ll come up with something that doesn’t even use hexagons!” and away they went. Here are some of the things they came up with: 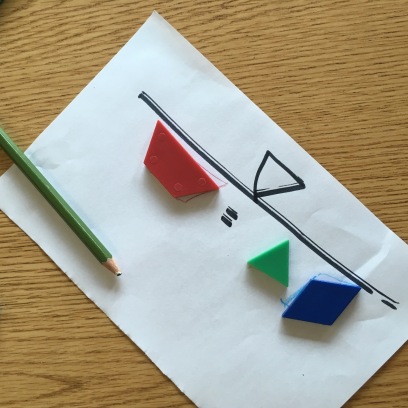 I have to say I was pretty happy with the results!  There was a lot of deductive reasoning going on as students built one shape and then reasoned that they could build other similar shapes.  It was interesting and I am sorry I don’t have more pictures to share!  My favourite was a long row of rhombus’ on one side of the balance, and a long row of triangles on the other, all neatly stacked in a row that equalled the length of the rhombus row.

This is my other favourite:

She built her own balance!  At first I thought she had too many blocks for no reason and was very close to questioning her when I realized it was a model of the balance.

I figured out, a few weeks too late, that we need more practice with shape names. But I was happy with the spatial reasoning I saw!

So, #SorryNotSorry kids!  You may have thought you were finished with the year, but, alas, you were not!  And stay tuned to find out what we are doing on Thursday!