You know when something goes so well on Tuesday that you assume Wednesday is going to be a piece of cake and then on Wednesday everything goes so wrong that you have to stand back and ask, “What was THAT?”  Well, that was my Wednesday.

On Monday we made groups of 10 to count totals of stuff.  I took pictures.  We congressed and talked about how efficient it is to count groups of ten.

On Tuesday we made groups of 10 and then created a chart where we recorded how many groups of 10 we had, how many loose (ones…the singles that didn’t make a group of 10) and noticed how those related to the number I wrote down for the total.  I was blinded by all the lightbulbs going off over the heads!  We ended the day with a fun writing activity. I had a number which I flashed to everyone.  They had a white board and they had to recreate our chart.  If I showed 47, they had to write “4 tens, 7 loose = 47”  but in a chart that I don’t  have a picture of.

On Thursday I took a step back. Or maybe sideways. I had some great counting items from the resource centre.  I had bowls to put them in, which meant that everyone had somewhere around 50 items, which was a manageable number for everyone.  I started by showing them a math rack with 5 red beads slid to one side. “How many would I need to slide over so that I would have 10 beads on this side?”  They got it easily.  Then I pushed 10 over and asked how many I would need to have 20.  Then I did 15, and asked about 20.  Then I did 7 and asked how many would I need to push over to have 10.  I repeated with a few more numbers – if I had 8 how many would I need?  What if I had 12?  or 18? Then I handed out the bowls and everyone made piles of 10 and I asked them how many they’d need to have only piles of 10.  And they could tell me. I took pictures so we could discuss as a group. I am happy to report that THEY GET IT!  Then we played “Tens Go Fish” and all was right in the world. 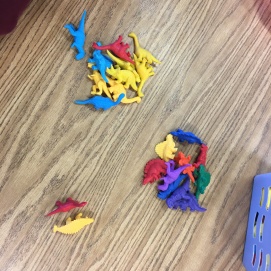 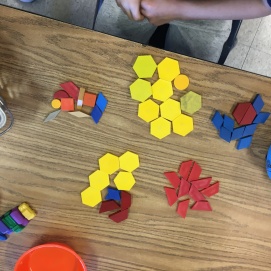 My family will be driving for the holiday weekend, so I may not end up posting about Friday.  But my plan is to do a bunch of backward counting.  We have a holiday on Monday and I am away on Tuesday so I don’t want to move forward with the next lesson in the “Collecting and Organizing” Context for Learning unit.  We haven’t done any backward counting, so this seems like a good way to spend our math time tomorrow.

I’m wondering at this point of working with a new tool was actually part of the key to this success.  We have done a lot of work with my counting jars, and I think they already know the answers for many of these jars.  They remember that there are 8 bottle caps in one jar, and 47 beads in another.  Are they really thinking about these numbers still?  Or are they just sort of multi-tasking – half paying attention the materials and the piles of ten while also thinking about Minecraft? I feel like having a new item to count got them thinking about the counting again.

Another interesting thing happened on Thursday.  A child who keeps telling me that grade 3 is too hard listened to me give the instructions for “Tens Go Fish”. As I neared the end he got excited. “Madame!  I played this game last year with Madame G!”  It was the most enthusiastic I have seen him in math.  Making that connection to the familiar was so important for him! Was the game maybe too simple for most grade 3 students?  Yes.  Was it still useful? I think so.  They could think about this in a different way as grade 3s than they had as grade 2s. They are now pretty proficient with making tens, for the most part anyway, so this really was a practice.  But they are now thinking about how making tens is useful for problems like 32+18, or 17+13.  Next, the grade 3s are moving on to triple digit numbers, and I feel excited about what this will mean for their understanding.

I live in Ontario, Canada. I teach. I hang out with my children. View all posts by Lisa Corbett