This week we were focused on two things:  estimating stuff and counting to see if our estimate was close.  I’m feeling really good about it!

There were some fun activities we did that I think really helped.

First, I had some small jars full of stuff.  We started the week by reading a book about estimation.  Then I held up one jar at a time and asked everyone to estimate how many were in the jar.  After the second one, I sent them to their tables to practice.  They had a great time estimating how many paper clips, beads, erasers or rocks were in each jar.  We did this on Tuesday and on Wednesday.  (We didn’t have school on Monday.)

We also played a game that I first learned this summer during a free week of online PD offered by Christine Tondevold.  There were new webinars every day, and one of them featured Graham Fletcher.  He dropped counters into a container but students couldn’t see what he was doing.  They had to rely on their hearing to count along and then identify how many were in the container.  We did this each day last week as a counting routine at the end of the lesson.  On Thursday, I started with this activity.  We had estimated enough times this week that I was ready to take it to the next level.  I pulled out one handful of counters. I asked the class to estimate how many I had.  They turned to a partner and discussed, then I constructed a number line as we went along to show where everyone’s estimate fit on the number line.  They were all convinced that I had no more than 12, so that was the last number on my line.  Then, I dropped them while they counted.  I had 17, so we had to stretch out the number line.  Next, I took 2 handfuls and asked them to estimate.  They did a quick turn and talk.  The first child I called on said, “Well how much is 17 and 17?  Cause if you can fit 17 in one hand then you probably have double that amount.” I was excited about this response!  The child is in grade 3, and I thought this was prefect reasoning. I annotated his explanation as he explained how he added 17+17 (sorry…had to erase that before I got a picture.)  We all agreed that it was pretty likely that I had 34 in my hand.  We started to count.  I had 37, which we all agreed is pretty close to 34, so 34 was a good estimate.

After we had counted them, one of my friends suggested that maybe I had 47.  Win some, lose some, right?  But I put that on the number line and we discussed our answer of 37 again and I think that friend understood that I had 37 and how far away from our estimate 47 is.

An interesting thing happened while we were counting.  Thirty-seven is a high number for some kids to hold in their head so they were using fingers and counting out loud to aide their working memory. I wanted to talk about this strategy so that those who hadn’t done it would know it’s a strategy they could use.  One friend said that he had actually only been able to count to 10 on his fingers at first so each time I got to ” a group of 10″ (“Like 10, 20, 30…like that!”) counters he held up 1 finger. He knew he had 3 fingers and that is 30 counters, then he just had the 7 to go with the 30.  I tried to draw that thinking too.  This strategy actually lead really nicely into our lesson.  We are working on the “Collecting and Organizing” Context for Learning unit next, and counting stuff is the beginning of that unit.  He introduced to us the idea that things can be put into groups of 10 to help with organizing and counting. 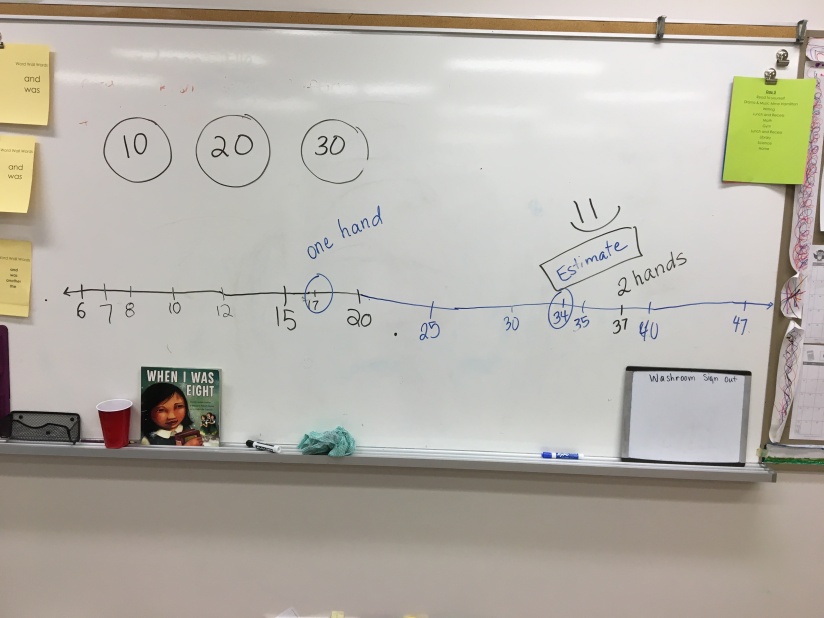 We did a bit more counting on Friday.  Everyone tried to make groups of ten, but many aren’t yet convinced that this will help.  We’ll dive deep into this unit whenever we go back to school (hopefully Monday!) and I feel confident they will have it by the end.

Up next on the spiralling document I have been following is more counting (forward to 100 for grade 2 and 200 for grade 3).  This week we did some hundred chart puzzles.  I had some made with 101-200 charts for the grade 3s to work on.  They all did pretty well.  They can now become a centre when I need everyone to do independent activities while I run Guided Math groups.  This will become really important in about 2 weeks (depending on if/how long schools are closed for the strike) when I want my grade 3s and grade 2s working on some different units. We also need to be able to count backward (from 50 for grade 2 & 3, and from 500 by 100s for grade 3s) so that will be the focus of our counting routines next week.

And look….nobody went to the washroom during our Number Talk that day!  Interpret that as you will.

I live in Ontario, Canada. I teach. I hang out with my children. View all posts by Lisa Corbett